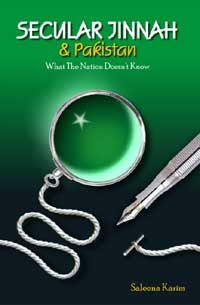 Never judge a book by its cover, they say. Imagine a child who is interested in Yeti, comes upon a tantalizing title such as Yeti: the Abominable Snowman, and excitedly reads cover to cover only to find out that the book contains evidence to show that the abonimable snowman is a myth, and no such creature actually exists.

Remember this the next time you hear someone talk about Saleena Karim’s book, Secular Jinnah and Pakistan: What the Nation Doesn’t Know. Contrary to the title, the book is actually a well-researched and convincing study to show that “secular Jinnah” is a myth (and abonimable like the snowman: some readers might conclude)!

In my opinion, it is a book that must be read. I shall try to explain from a personal point of view why I think so.

The founder of Pakistan was the hero of those who wanted Pakistan, and therefore a villain to those who didn’t. The latter included the Western media, the Israel Lobby and Indian nationalists. Against the enormous influence of this school, the pro-Quaid point of view was bound to lose. It got buried by the early 1980s (the historical fiction, Gandhi, released on the big screen around that time, may also have contributed).

When it became too difficult to defend Pakistan and the Quaid at the same time, a new trend emerged among the pro-Quaid: never mind Pakistan, just defend Jinnah. The most well-known classics of this school include The Sole Spokesman (1984) by Ayesha Jalal; Jinnah of Pakistan (1984) by Stanley Wolpert; and the belated attempt by Jaswant Singh last year. In order to defend Jinnah internationally, some of these writers suggested that Jinnah didn’t actually want Pakistan.

Back in the 1980s, such writers were received like a breeze of fresh air. Compared to the homebred defenders of the Quaid, their work seemed to be presented with more elegance and better research. Hence, rasing the standards of research and widening the horizons was the permanent contribution of these writers, but there were drawbacks.

One of the drawbacks was the myth of “secular Jinnah”. Healthy debates are good for society, but unfortunately “some” secularists resorted to unfair means, such as a "fake" quote attributed to Jinnah by a former secularist Chief Justice of Pakistan – a "hoax" exposed by Saleena Karim in her previous work, and further explained here.

Coming out in the year 2010 – almost twenty years after Wolpert’s book got reprinted locally – Secular Jinnah and Pakistan brings things to full circle, in some ways. It gives back to the people of Pakistan their familiar Quaid-i-Azam: the father of the nation who shared their ideals and beliefs. He had been away for twenty years, but like the hero of Arthur Jones' play Silver King, he has come back more elegant and well-equipped than before. A must-read, and you may like to visit the book’s website too.


To be continued
Posted by Khurram Ali Shafique at 17:49

Nice selection and a interesting and cautious introduction to what seems an important book .

thanks for sharing.I will definitely get this book.Easily available siR?

An excellent book clarifying the myths and exposing the personality of Jinnah which we never knew before. A must read for every Pakistani. Khan Adeeb Ahmed

I got the book last week and it did a good job presenting another point of view. The new facts are interesting and personally I would like to see more evidence. But eventually we as a nation need to find our identity either selecting the one dreamed by Iqbal or created by Quid or may be developing a brand new one!