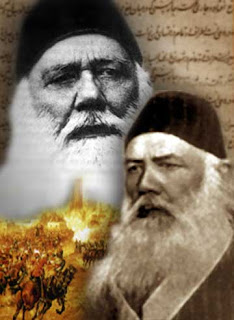 The following is my article published as "Friday Feature" in Dawn, September 17, 2010.

THEY were 67, and represented the largest Muslim community in any one country. They had come to Aligarh from all over British India, and included knights and nawabs as well as primary school teachers and ordinary people.
Since 150 chairs were laid out in the Stretchy Hall of Mohammedan Anglo-Oriental College, some 70 students also got invited for filling the vacant seats. The issue, in the words of their host, Sir Syed Ahmad Khan, was this: “Although we are called a nation, we are unaware of each other’s circumstances, as if we were different peoples.”
The participants wanted to realise a Muslim nationhood. To this end they agreed to hold annual gatherings where the community could reach consensus on matters of national importance. The organisation holding these sessions, each year in a different city, was to be called Mohammedan Educational Congress (later changed to Conference). It came into being on December 27, 1886.
This event may qualify as the starting point for the present phase in the history of the development of Muslim thought in the subcontinent. Although the idea of consensus was rooted in the Quranic instruction that believers should consult each other when deciding important matters, no Muslim community after 7th century CE had been able to make its own consensus the final arbiter, since monarchs had come to hold sway after the Pious Caliphate of the early period. Hence the resolution of 1886 was the beginning of a new chapter, not only in India but across the world of Islam. It read:


"In view of an overall decline in education among Muslims, and with a mind that efforts should be made for progress in all forms of education through a national consensus and by taking national initiatives, it is desirable that a session called Mohammedan Educational Congress, comprising people from several districts, should be held every year for deliberating on such matters. This session shall not be held at a fixed place but held each year at a place whose residents are willing to make arrangements for it.”

The rationale behind founding such an organisation was, in the words of Sir Syed, “that we should meet and convey to each other our ideas regarding education and progress of the nation. Whatever mistake there might be in our thinking should get corrected through the opinions of others.”
Hence the idea of rejuvenating Muslim thought in regard to education, a Quranic injunction no less than one that urged the faithful to consult amongst themselves on matters of public good, was different from ‘consensus’ as viewed in a western democracy, in which a contender remains a contender, and the winner’s view prevails over all others. It was also different from the socialist agenda that emerged later, where public opinion would be overruled by a preconceived ideology. Thus, consultation amongst the faithful, as inspired by Islam, treads its own course. Sir Syed’s Education Conference was a potent example of that immutable aspect of applying Islam as a guide in practical affairs by a group of individuals who felt responsible towards the Muslim nation, the millat, as Sir Syed called it.
The ideal then, as perceived by the founders of the Conference, was that an election, poll or any other forum of public debate and representation ought to be an opportunity for learning from others rather than proving oneself to be right. Since a human being has a soul, a heart and a mind and therefore the ability to reason for his own good, seeking consensus of the community – including the unschooled and the uninitiated – could shape new ideals to overrule any pre-existing thought or ideology.
There were three significant implications inherent in the resolution that was passed that day: (a) quest for an ideal; (b) identification of the tool through which it should be pursued; and (c) the commitment to work towards achieving the identified goal. The ideal was that in all matters of collective life, action would be taken through consensus. The tool was the annual Conference itself, and the goal to be achieved was to become a nation that was willing to act for the common good.
Over the next twenty years, the Conference took its message across India. Thousands would gather at the annual session and become inspired by the new ideal through poetry, lectures and debates. A significant goal post was achieved in the 20th annual session on December 31, 1906, when All-India Muslim League was founded at Dhaka as a representative voice of the millat.
The party united diverse Muslim sects under one banner. Sunnis were in a majority but by consensus they chose the leader of the Shia Ismaili community, Sir Sultan Mohammad Shah, Aga Khan III, to lead them. This was the most aspiring consensus in the history of Islam of at least the last 1000 years. India’s Muslims had done what Muslims elsewhere had failed to do repeatedly since the death of Umar bin Abdul Aziz in the early 8th century. It truly transformed the community into a nation that would henceforth act as a whole for realising its aspirations.
Thus the ideal born in 1886 was realised, and the goal achieved, in 1906. It was time to shape the next ideal, and set a new goal in the saga of critical Muslim thought in the subcontinent.
Posted by Khurram Ali Shafique at 06:47 3 comments:

Conflicting news are coming about the Quran-burning event. The story changed even as I was writing this post, and since I don’t know what twists are yet to come, I am posting the thing the way I wrote it (just now), along with link to the news page where updates can be found. 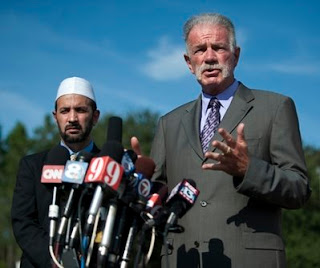 Pastor Terry Jones, who had called for burning the Quran on September 11, has cancelled the event “because the leader of a much-opposed plan to build an Islamic Center near ground zero has agreed to move its location”, according to an item from Associated Press, posted on Yahoo! News just a while ago. “The agreement couldn't be immediately confirmed,” AP adds. There are glitches.
GLITCH 1: According to the news item (still being updated as I write this), “Jones said Imam Muhammad Musri of the Islamic Society of Central Florida told him that officials would guarantee that the mosque would be moved.” The “mosque” refers to Park 51 (the so-called “ground zero mosque”), which is being led by a certain Imam Feisal Abdur Rauf. Did he authorize Musri of Florida to make any such promise? (See next).
GLITCH 2: "I asked him three times, and I have witnesses," Jones said, referring to Imam Musri of Florida. "If it's not moved, then I think Islam is a very poor example of religion. I think that would be very pitiful. I do not expect that." What if Rauf has not been consulted and Musri has made a promise on his own? (Since President Obama has already called the whole act of Jones a “stunt”, we wonder if this announcement about a deal is yet another stunt staged by Jones after he failed to gather support for his call to burn the copies of Quran: see next).
GLITCH 3: According to news report, Imam Musri “thanked Jones and his church members ‘for making the decision today to defuse the situation and bring to a positive end, etc”. Even if this deal turns out to be real, the saddest thing is destruction is being equated here with construction. Somebody wants to build a community center. Jones responds by threatening to burn copies of the Quran. This is blackmail and coercion, and not “a positive end” of anything (See next).
GLITCH 4: This came just as I was writing this post: “The imam and developer behind a plan to build an Islamic center near ground zero are denying reports that there is a deal to move the facility.” This is the latest update. So, was it just another "stunt" of Mr. Jones after all?


Note: Photograph is from Associated Press.