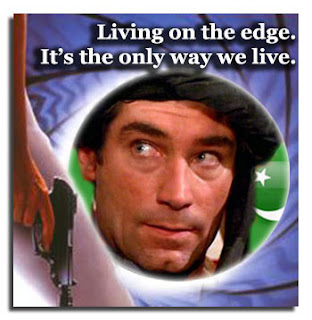 The fifteenth film in James Bond series appeared in 1987. Unlike in the West, The Living Daylights became quite a sensation in Pakistan. We had participated in the Afghan War of Liberation for years and had felt the pinch too: drugs and guns smuggled through the open border were seen to be destroying the more sophisticated culture of Pakistan. James Bond in shalwar kameez, helping Afghan freedom fighters not because it was his war but because he was trying to save the world, blowing up a hyper billion shipment of heroine together with the C-130 military aircraft carrying it, rescuing the starry-eyed Russian girl from the clutches of bad communists and listening to Mozart in the music halls of Vienna: the allegory could not have been more complete for the urban Pakistani ("Living on the edge," the film poster was saying about the hero. "It's the only way he lives."). I watched the movie seven times in a cinema in the city center and invariably the crowds included diverse cross-section of the society from the most educated to the unschooled and the working class.

Ibne Safi was now dead for seven years and Waheed Murad for four. Bookstores, rental libraries and cinema houses were fast vanishing. Pakistan was soon going to depend on imported fantasies not only for its politics, religion and education but even daydreams. Welcome to the Valley of Wonderment.

I call the twenty years from 1987 to 2006 the Valley of Wonderment in the history of Pakistan because Sheikh Fariduddin Attar has described the valley in The Conference of the Birds as a place where the Unity previously written on the souls is gone. Travelers do not know whether they are dead or alive, awake or asleep, and all they can tell is that they are in love but do not know with whom. There cannot be a more apt description for this phase of our collective life.

Our intelligentsia had been working for it. Since 1936, they had not used any parameters that were our own and had redefined originality as an exercise of imitating "high literature" of the West in the vernacular. What was recognized as the best of our own had been defined by the West too, so it was only natural that the entire society should finally give in to foreign influence whole-heartedly. Hence we asked questions that wouldn’t have arisen if we had known ourselves better (questions about identity, for instance).

These questions gradually came to resonate in my writings too. At least for me it is ironic that this period was my most productive (I was nineteen in 1987, so the Valley of Wonderment was my prime time). I may not agree anymore with a lot of things I wrote then, not because they do not seem to be true anymore but because now I feel that it is possible to look deeper and find other realities beneath the surface. Since the Valley of Wonderment was to see things essentially through approaches that prevailed elsewhere, it meant to find and enjoy contradictions in personalities and to take the benefit of doubt in ideas. When looking at Pakistan, it appeared nobler to search for an identity rather than finding it.

I am still preserving my writings from this period on my website, as many as I may find and possibly upload, because many are good hard work (the Valley of Wonderment is also the phase of erudition). These were also the days when I was reading a lot, and diversely, and that reflects here too. Some pieces also present field research that could be useful in its own right. On the whole, these are my notes from the Valley of Wonderment, which I understand to be a state through which many have passed and many more are bound to pass, and that is yet another reason to preserve these writings as first hand account of the experience:

I draw the line on this phase of my writing in October 2006. That is when I started on The Republic of Rumi and the work became a breakthrough for me.
Posted by Khurram Ali Shafique at 21:47

This is wonderful, especially your concept of our collective actions, or way of being.
I wonder which valley we are now in, when Shahid Afridi, under the surveillence cameras, has the audacity and gall to actually chew on a ball, and tamper!! Are we a collective nation of cheats.
Is it not necessary to write to exhaustion on this issue, whereby our cricketeers, ambassadors of the nation, in whom all aspirations, hopes, dreams of both young and old alike, rest. Who are representative of a nation, stoop to this. Should not much much and yet much more be written to denounce this action. should not a nation ostracize him, collectively; two ODI bans should not be considered enough of an atonement.

as a cricket lover, i agree with your sentiments. but as an afridi apologist perhaps, allow me to say this. pakistan as a cricketing nation, has been banished even form this valley of wonderment. it is the global pariah, not given matches, IPL contracts, tours, or the time of the day. this alienation was woefully apparent over the past tour, as the team struggled to do the basics right because it was so long since they have played regular cricket. and the frustration of all these things boiled over eventually. in a sense, afridi's act of madness is no different from a suicide bomber's, or a politician claiming his party is better because it is less corrupt than the others, or heads of hockey federations indulging in human trafficking - we have been cut out for so long that even the bizarre, the desperate, and the despicable appear as viable options for us.

i am a budding film maker, and i have some important questions to ask of you, as a shagird to an ustad. i would love to be able to communicate with you, and would highly appreciate it if you could drop me a line at ahmertensionATgmailDOTcom so that i could send you some of my ideas and questions.

oh and this post captures the very essence of what i have been battling with. beautiful allegory :)

hmm...the valley of wonderment is a phase after which we will find ourself.

Sometimes our journey turn out useless but it can add expirience in one life.

While you were wondering in valley of wonderment your writing at that time and in that valley may help lot of others to complete that phase more rapidly and may save time.

I belived that we already had our true indentification and a definite line of identity. Which could be taken out from our religion but unfortunately, instead we used our religion for accuiring power and imposing ourselves on masses.

This is the irony that we were lost with all the signs.

I always wonder that why and what caused us that blindness and dumbness???

hmm....I am going through your writings and will reply you about them.