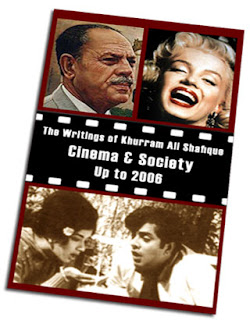 These writings which I am collecting as Cinema and Society, Up to 2006, trace my journey through questions and explorations in film criticism theory from 1987 to 2006 (see “the Valley of Wonderment”):

Sometime in the mid-1980s, in the Urdu edition of UNESCO’s magazine for the youth, Payami, I saw a write-up that drew connections between the rise of cult heroes and social circumstances prevailing in their times. The figures studied there were Dilip Kumar, Waheed Murad, Amitabh Bachan and Michael Jackson.
A little later, around 1987, I came upon British Cinema and Society, 1930-1970 by Jeffrey Richards and Anthony Aldgate (1984), which showed that feature films represented an important and largely untapped source of evidence for understanding the history of the present century. The authors had tried to answer some simple questions about ten British movies:

These ideas never left me completely as I went on exploring other dimensions (especially Auteur, feminist, psychoanalytical and anthropological approaches). Even material written about Indian cinema from these perspectives was rare to find in Pakistan, and absolutely very little was being written about Pakistani cinema that could be comparable with such studies. I had seen some old issues of Eastern Films, an exquisite magazine about Pakistani cinema published from Karachi in the 1960s and the early 1970s. Hence I knew that there had been a foundation that could be built upon. However, i

ndigenous parameters for evaluating our cinema were either non-existent or had been worn-out already. I had to do my best within frameworks acquired from elsewhere.

The advantage was that my writings were readily comparable with some credible stuff being written abroad because I was speaking in the same terms. They may still be of interested to a wider audience than some of my new ideas and be useful for universities interested in a Pakistani perspective on cinema and society within the widely known parameters of media studies.

Posted by Khurram Ali Shafique at 15:43