Here are two interesting comments on the German thinker Nietzsche (seen in the picture below) by Allama Iqbal that were first published in New Era (Lucknow) in 1917. 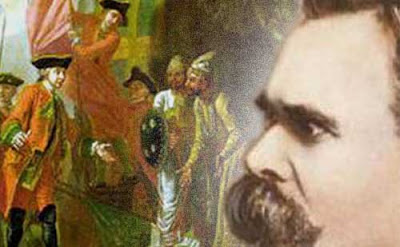 Muslim Democracy
The Democracy of Europe – overshadowed by socialistic agitation and anarchical fear – originated mainly in the economic regeneration of European societies. Nietzsche, however, abhors this ‘rule of the herd’ and, hopeless of the plebeian, he bases all higher culture on the cultivation and growth of an Aristocracy of Supermen. But is the plebeian so absolutely hopeless? The Democracy of Islam did not grow out of the extension of economic opportunity, it is a spiritual principle based on the assumption that every human being is a centre of latent power, the possibilities of which can be developed by cultivating a certain type of character. Out of the plebeian material Islam has formed men of the noblest type of life and power. Is not, then, the Democracy of early Islam an experimental refutation of the ideas of Nietzsche?
Nietzsche and Jalaluddin Rumi
Comparisons, they say, are odious. I want, however, to draw your attention to a literary comparison which is exceedingly instructive and cannot be regarded as odious. Nietzsche and Maulana Jalal-ud-Din Rumi stand at the opposite poles of thought; but in the history of thought it is the points of contact and departure which constitute centres of special interest. In spite of the enormous intellectual distance that lies between them these two great poet-philosophers seem to be in perfect agreement with regard to the practical bearing of their thought on life. Nietzsche saw the decadence of the human type around ihim, disclosed the subtle forces that have been working for it, and finally attempts to adumbrate the type of life adequate to the task of our planet, “Not how man is preserved, but how man is surpassed,” was the keynote of Nietzsche’s thought. The superb Rumi—born to the Moslem world at a time when enervating modes of life and thought, and an outwardly beautiful but inwardly devitalising literature had almost completely sucked up the blood of Moslem Asia and paved the way for an easy victory for the Tartar—was not less keenly alive than Nietzsche to the poverty of life, incompetence, inadequacy and decay of the body social, of which he formed a part and parcel…
Posted by Khurram Ali Shafique at 01:35

What little I have read about Nietzsche has caused me enough concern I haven't had the desire to go further. (I remembered that some believe he had influenced Hitler)...Among other more literary and erudite pieces and a few items on the "criminal mind", I found a reference to Nietzsche going insane the last 10 years of his life and his sister evidently twisting his work to suit Hitler's agenda. (Yet some have theorized that the work before twisting had already influenced the sociopath greatly. Thus, why I haven't wanted to revisit him much...)

The differences and the departure points you raise here are quite assuring as to soundness of Allama Iqbal's and Rumi's interpretations of Islam on a social level - neither dismissing either the working nor the refined classes.

The concept and values of developing a "superman" is highly worrisome - especially in our day and time and with the sophistication of technical systems without heart.

This type of comparison is especially useful - perhaps - to those of us who grew up with a more Western education wanting to understand your own. Yet also perhaps helpful for your educated there to see what has gone awry in our various social systems and governments and how philosophies and poetry can have such a profound effect.

Ammara and Connie, thanks.

Further with reference to Connie's comment: Nieztsche was quite fashionable among many people before the Second World War (1939-45). Since then, although his identity has become unpopular but one thing which Iqbal tried to point out was that even many who deplore Nietzsche by name still end up subscribing to various schools of thoughts inadvertantly influenced by him.